I'm still trying to do a bit of organizing, but we've been a little busy around here.

This was a little project that started last summer already when we found a little medicine cabinet at a garage sale.  Laura and I had a vision for it, but had to wait for the room to be finished.

Now it is done and the smaller finishing touches can be worked on.

First we painted the old white with a metallic spray paint.  Leftover paint from the clawfoot tub project. 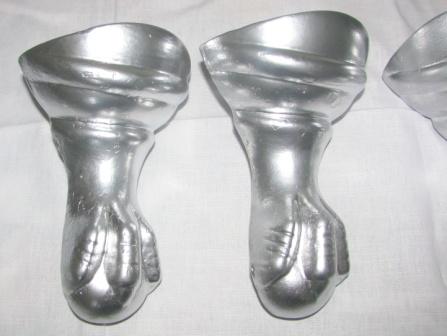 Tonight we added a little crystal knob.  I mention this because it's pretty. 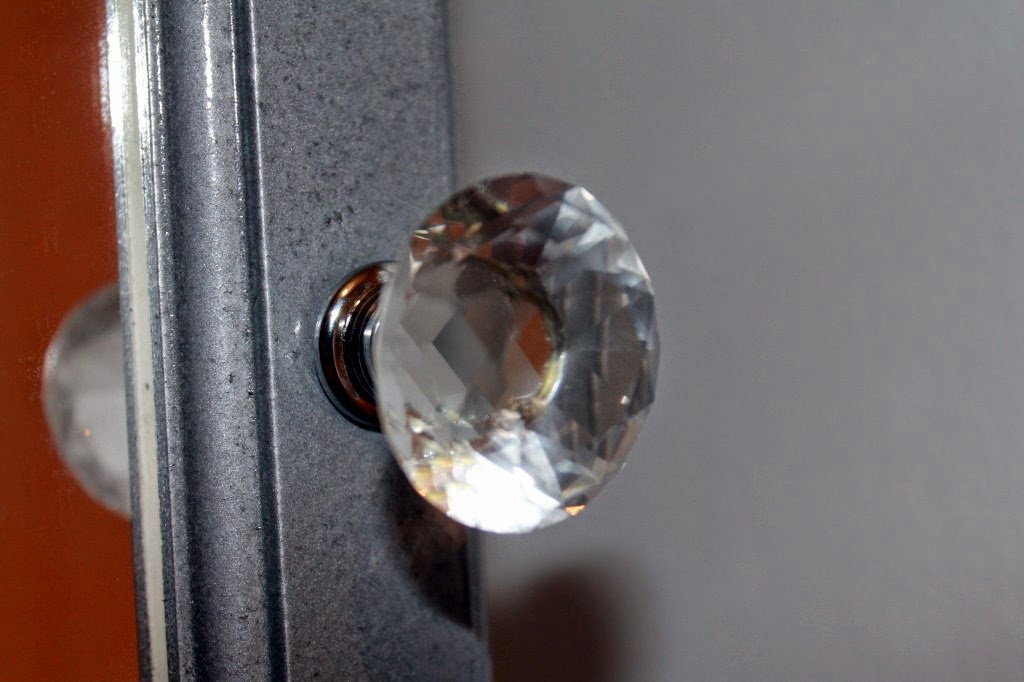 And because it explains the fingerprints all over the mirror. 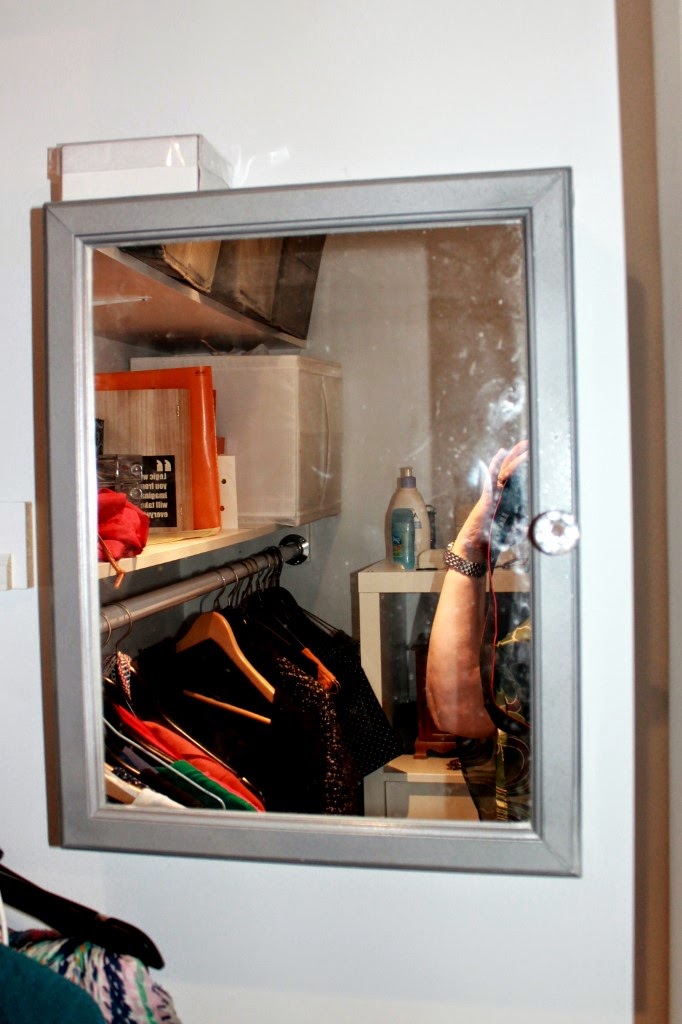 It was really tough to open without the knob.

But it's the inside that qualifies this project as a lenten organization project. 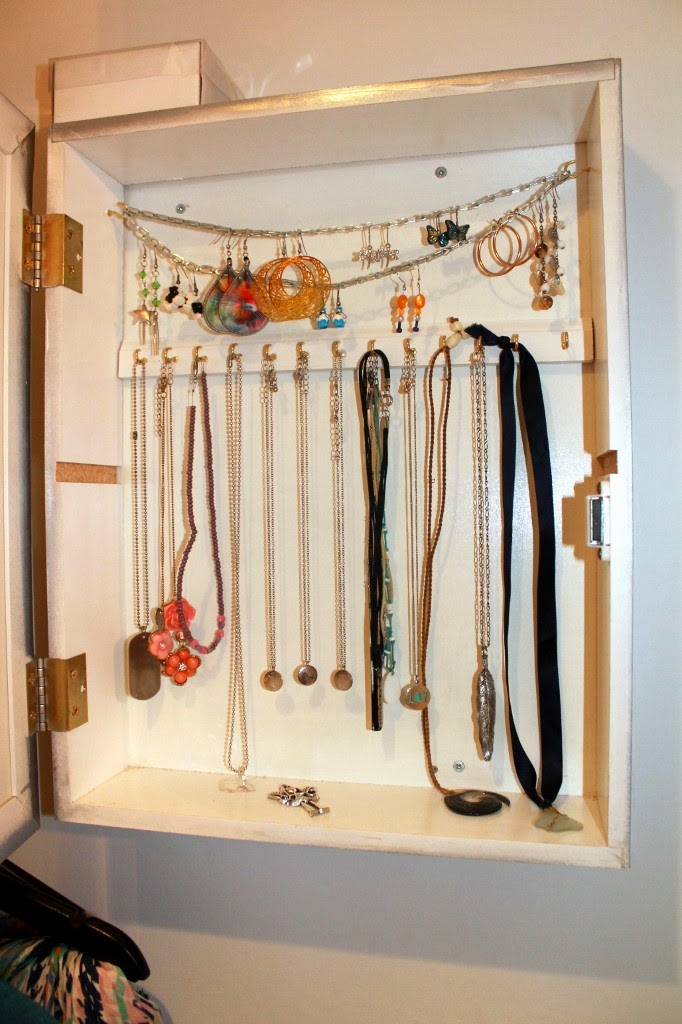 Laura has this hanging in her small walk-in closet and it keeps all of her earrings and necklaces organized.  I love it and think I might want one myself.
Posted by Evelyn in Canada at 10:34 AM No comments:

I haven't done "the big reveal" post for either of the girls' rooms yet.  They've been moved in for a couple of months now and they are pretty much done.

This is Beth's room. 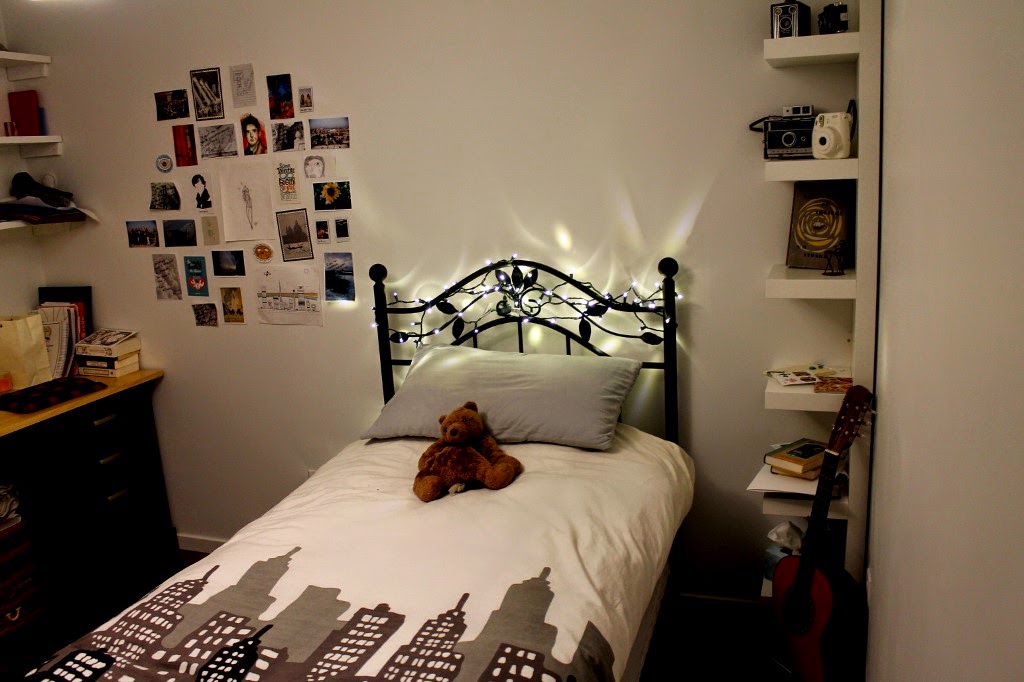 Both Laura and Beth have the same beds, and although they really looked forward to decorating in their own style, they've both chosen to wrap their headboards in fairy lights.

After Christmas I managed to snag a couple of boxes for $2 each, and they throw enough light to read by.  And I love the fact that they don't really heat up.  For daily use though, I must say that they are $2 quality too.  Laura already has a broken strand.  Oh well.  Nothing really lost. 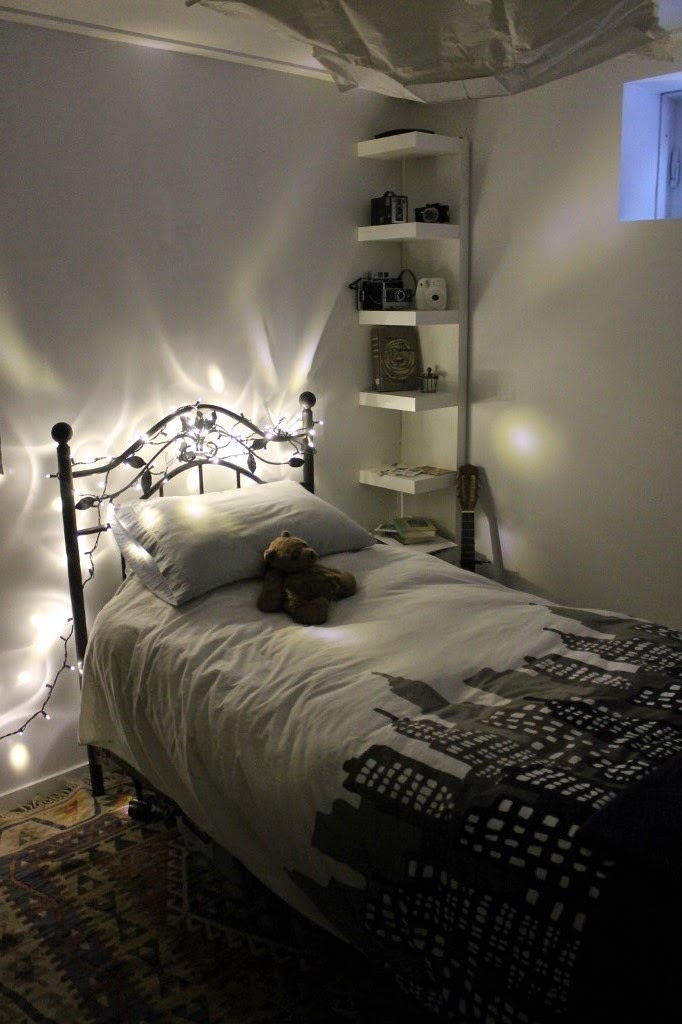 Although I would have loved to put more trim on Beth's ceiling (like in Laura's), it scared me to not know exactly where the little plastic plumbing pipes were running.  The chances of puncturing one with the brad nailer was enough to make me hesitate.  She has a lot of pipes in her ceiling, being located between the bathroom and the hot water tank. 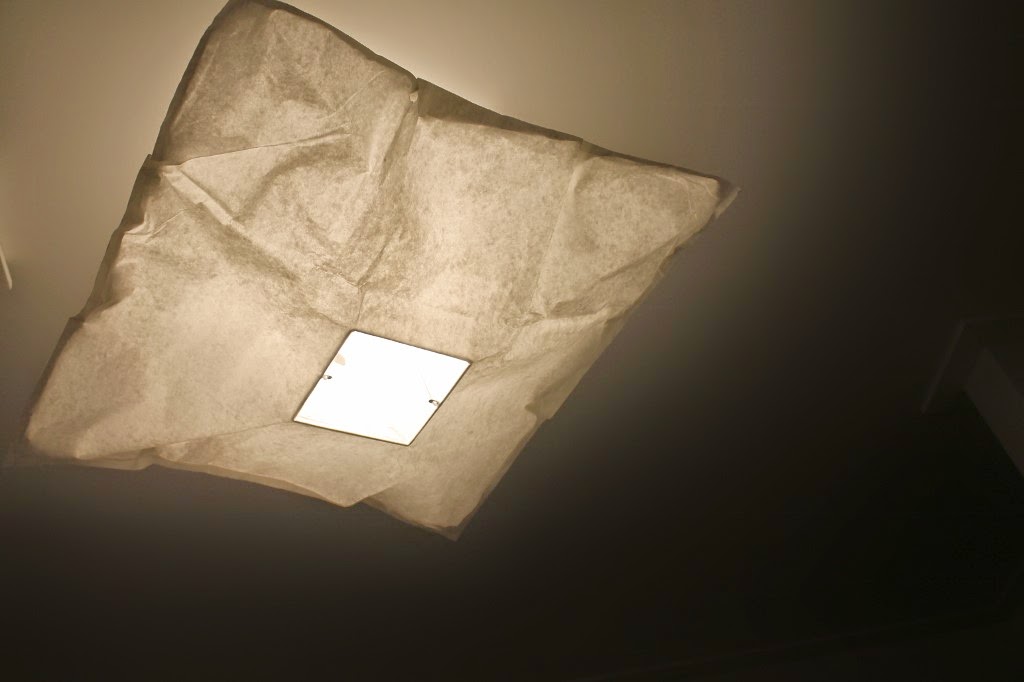 I still love her ceiling and putting the trim on the ceiling saved mudding and taping where the ceiling met the walls.  I guess that would be true of crown molding too, but I really like this look.

I remember being allowed to pick my own ceiling light when I was about Beth's age as we moved into our new house.  We made a trek into Calgary to the big IKEA store and I came home with a paper light.  So did Beth. 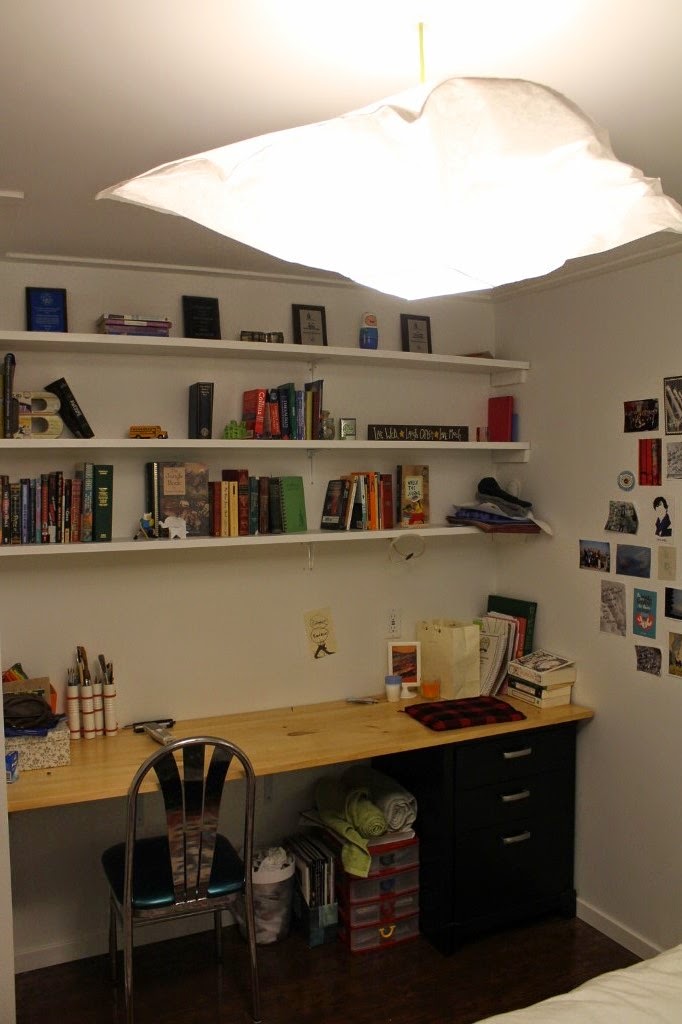 And like my fixture, one wrong move while installing it could rip it to pieces.  We were careful though and I like the modern look of it.  And it cost something like $6.  Gotta love that!

It's a small room so we did a lot of built-ins here instead of leaving space for furniture.  The desk was totally new for me to do.  I had to glue and clamp three planks together, fill any cracks (what plank is perfectly straight?) and then stain it.  It's far from perfect, but it works and looks good. 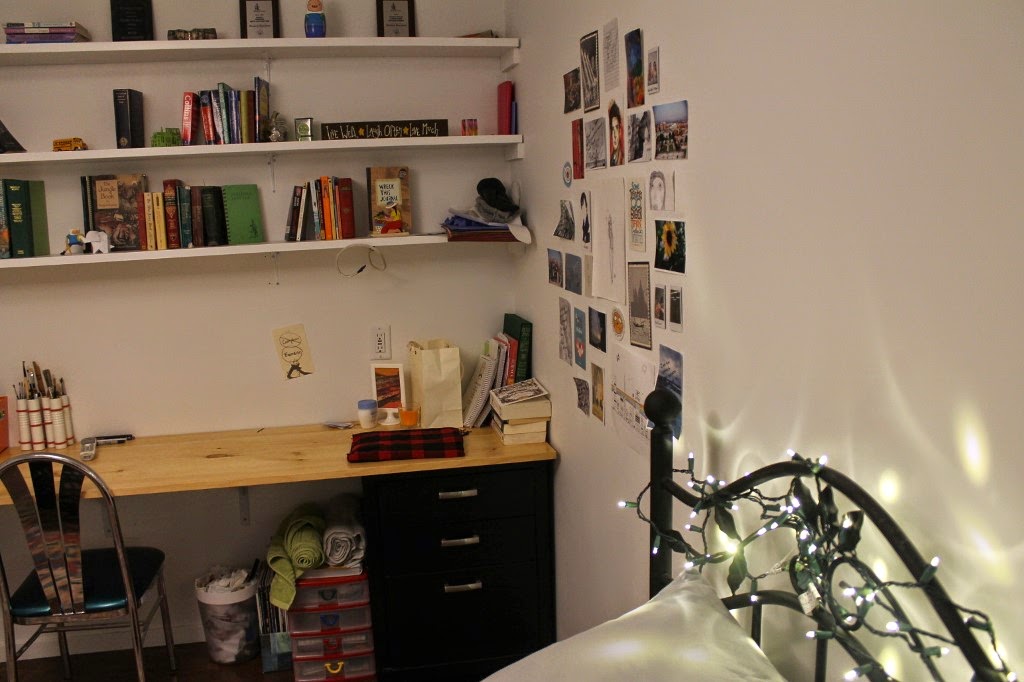 Beth would love a section that raises like a drafting table or art desk, but that may just have to be a separate thing.  And the shelves allow her to display some of her favourite books and things. 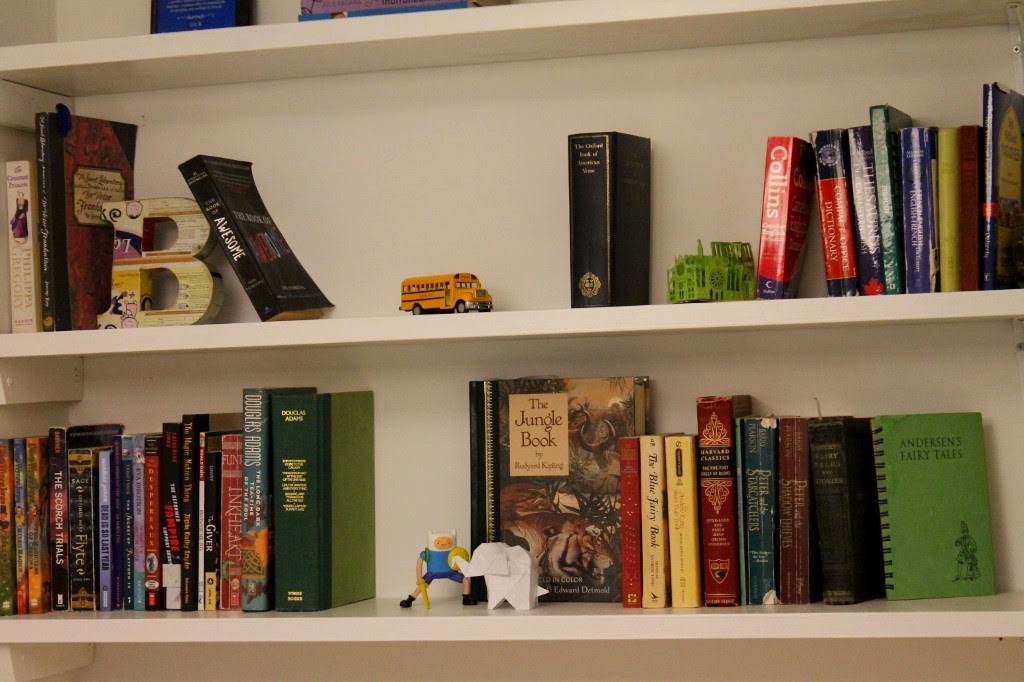 This is my favourite wall. 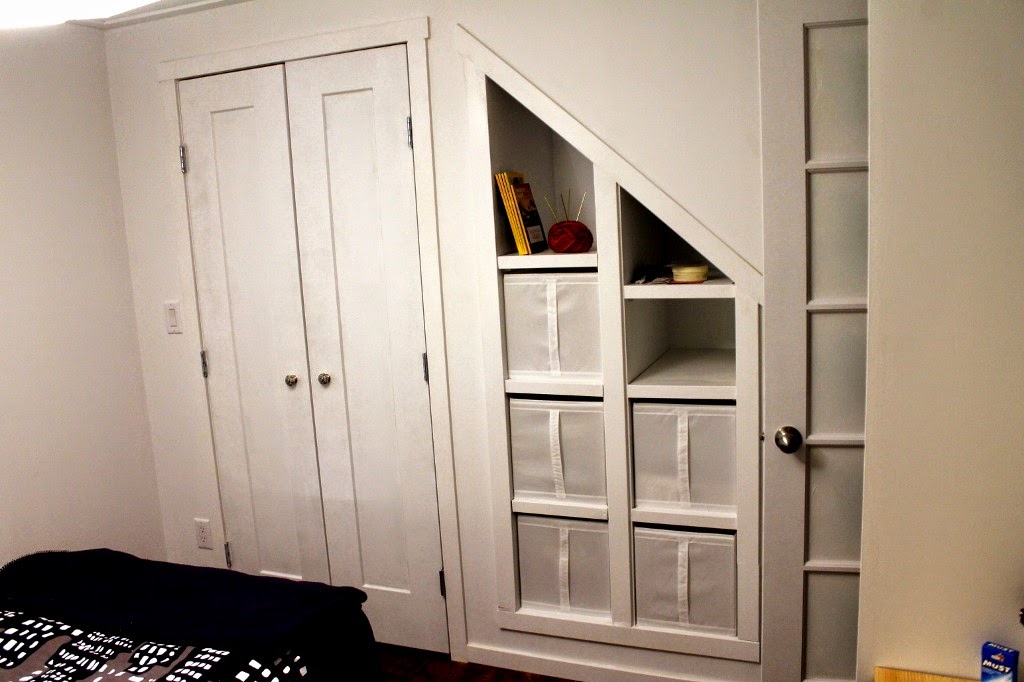 It's perhaps unreasonable how proud I am of the trim.  Especially the angles.  It turned out pretty great and there's so much storage space where there was useless, inaccessible space under the stairs in the past. 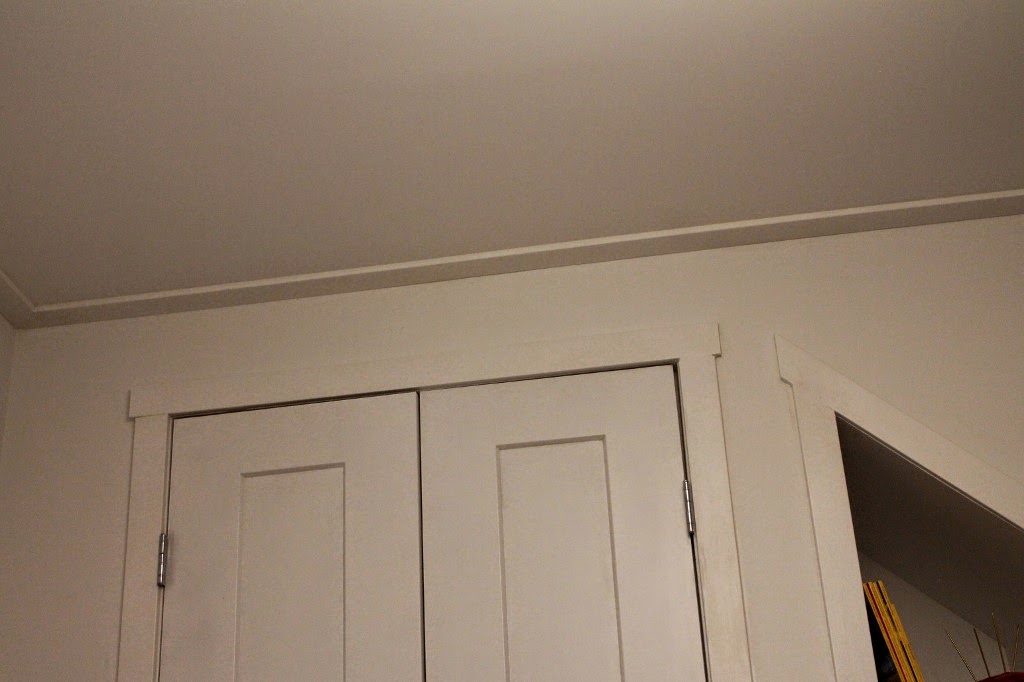 We just put the knobs on the closet doors tonight. 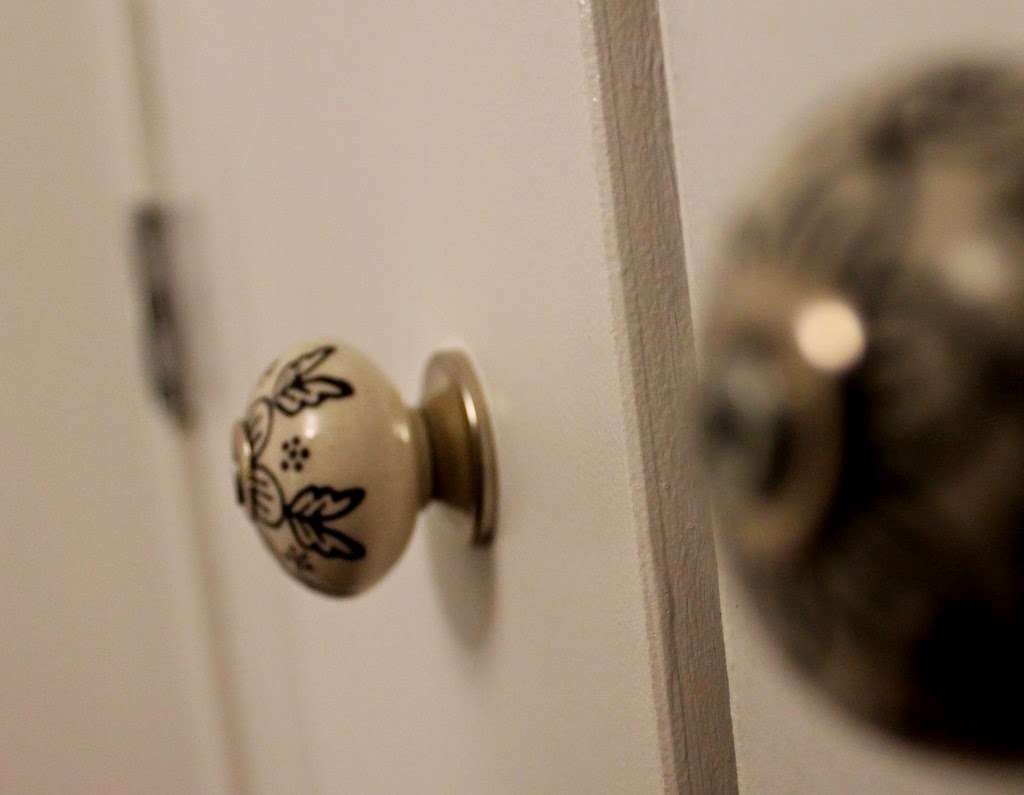 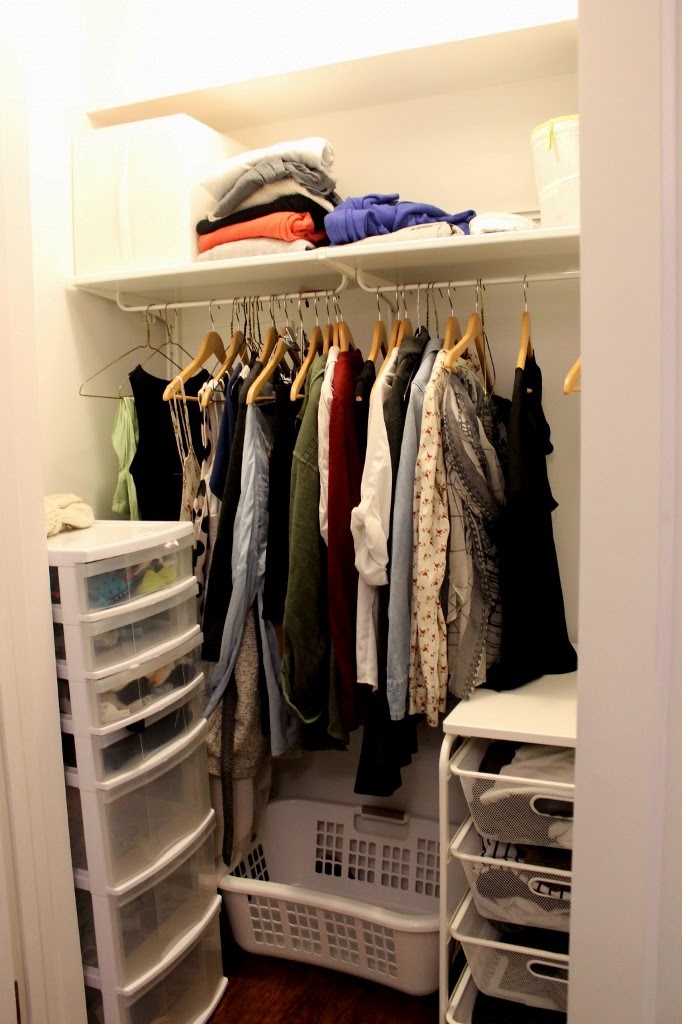 The inside of the closet is a mixture of things we already had and an IKEA closet system. 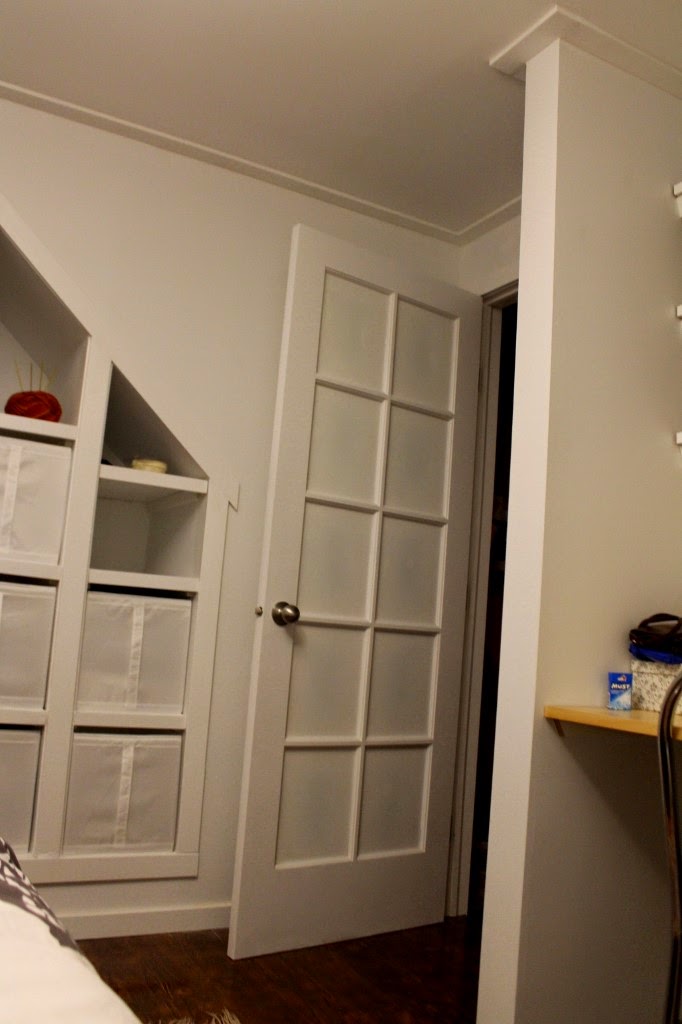 Alice and I just finished a game of Carcasonne. 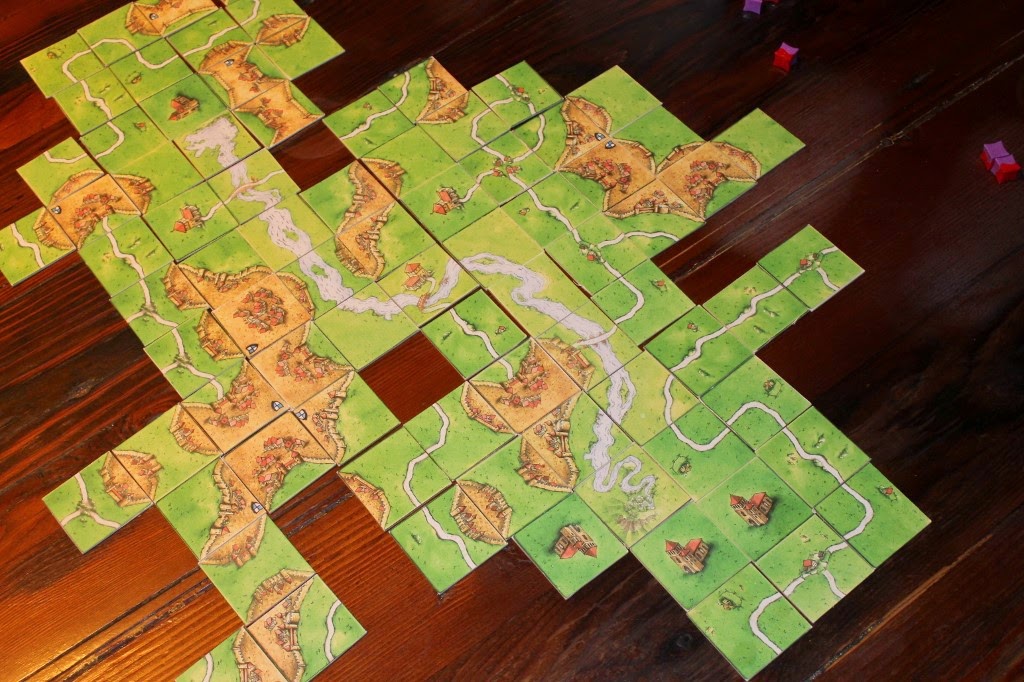 I love the little roads, rivers and farms.  I think every piece is just slightly different, making it fun to look at the final picture.

Besides the nice landscape that it makes, it's a bonus that it's actually fun to play! It's one of the few games we have that takes very little setup, little strategic thought and only two consenting players are required.  In a house where we're all busy, that's a very good thing.

And another pattern I've always liked: 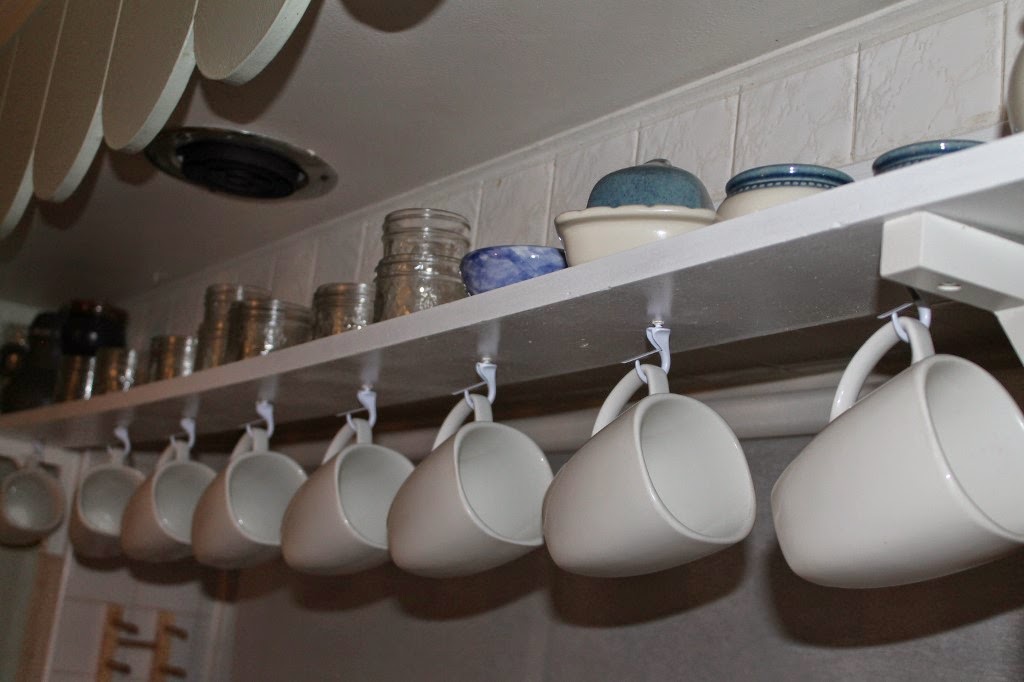 A nice line of matching mugs.

The girls like their mismatched, personal mugs, but I like the symmetry of plain white matching mugs. Their mugs remain hidden behind closed cupboards, but mine are now on display hanging below my new sink shelf.   One more Lenten project complete.
Posted by Evelyn in Canada at 7:31 PM 2 comments:

Lenten organization is going well, but it's not daily.  Some days I come into the house and barely have time to cook and eat before running out the door again.  I've signed on for a little singing gig that lasts for another week.  Then I might feel a big more free.

Also some projects take more than a day.  This is one of them.

Besides some cleaning, and donating unused items to Goodwill, this shelf above the window has helped to clear up some space in the kitchen. 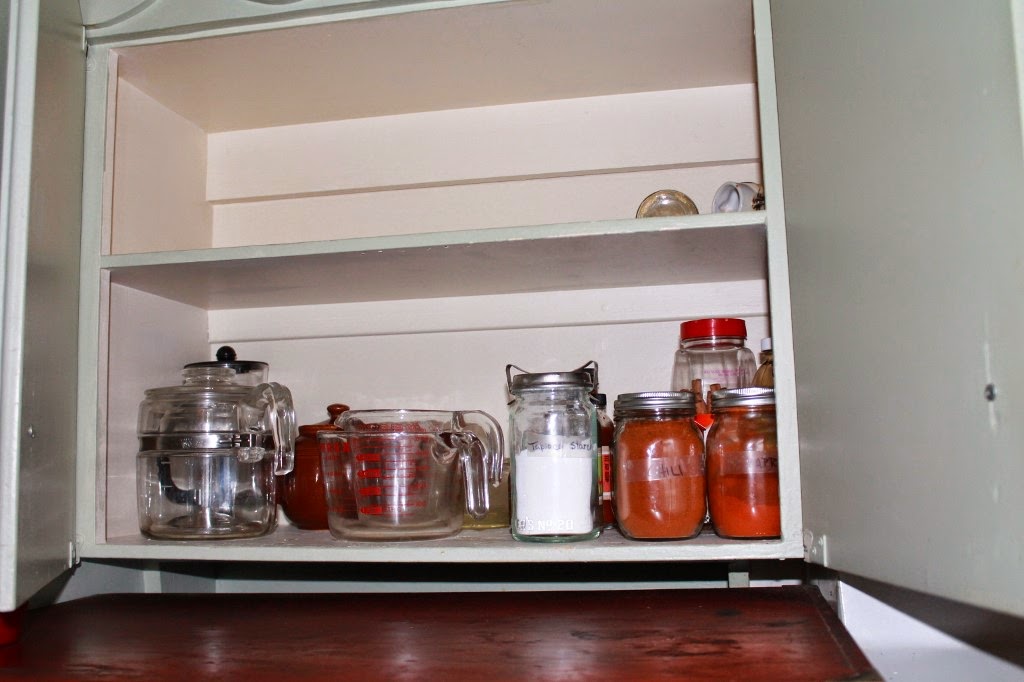 I don't know when I've last had an empty shelf in the kitchen.  So exciting!

And there's more too. 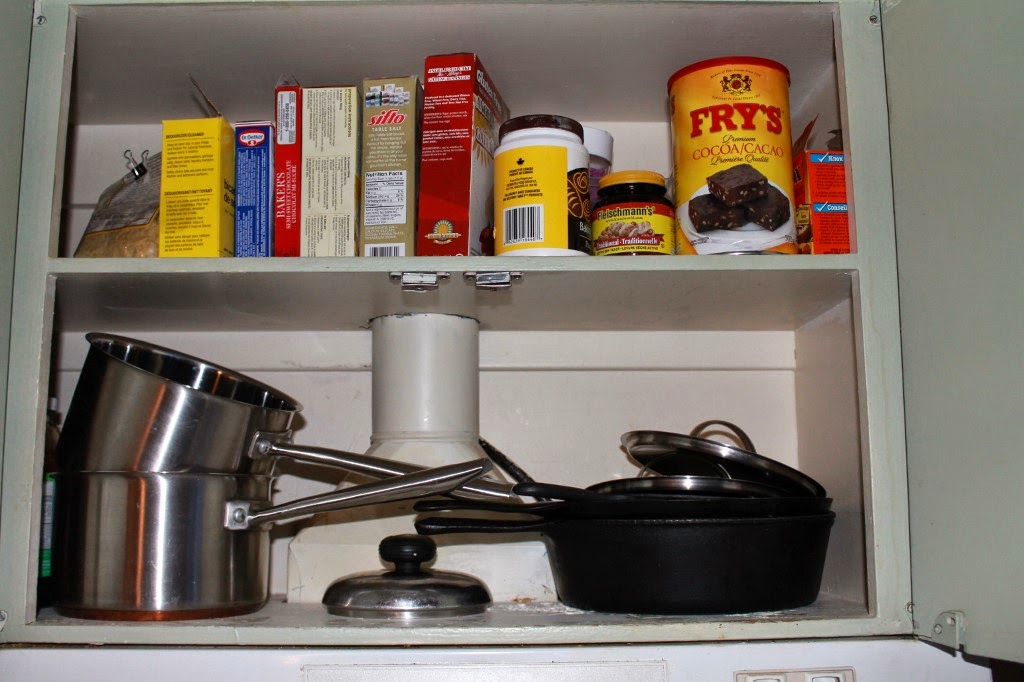 This shelf above the stove (hence that awkward ventilation pipe) has never looked so neat.  And the bonus here is that my favourite pans are now reachable without bending down to a bottom cabinet, a movement that often hurts more than I would like.

The downside is that Alice can't easily reach them now.  Oh well.  I cook more often than she puts dishes away.  Taller family members will just have to help out while her growth catches up. 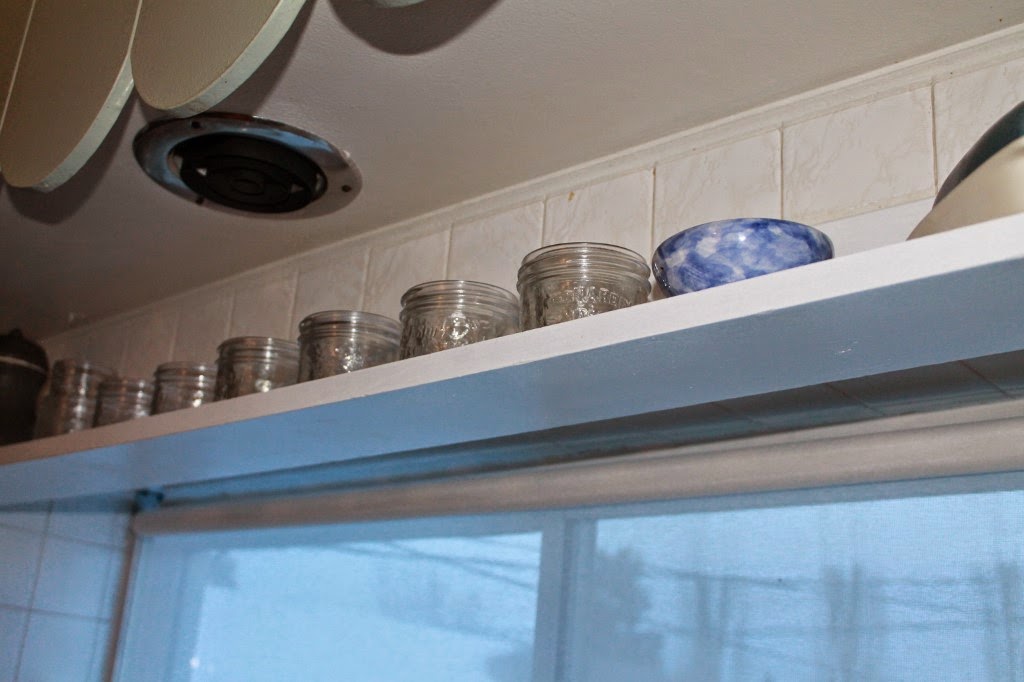 Obviously the old pan cupboard now has space.  I just can't think of what I don't mind reaching down and lifting.  It has to be kind of light and not used often.  Maybe the crock pots?  And the light popcorn maker.  Still thinking about what makes sense.

I also have a small plan for this shelf that will help in other areas yet.

I'm really liking how Lent is turning out so far. 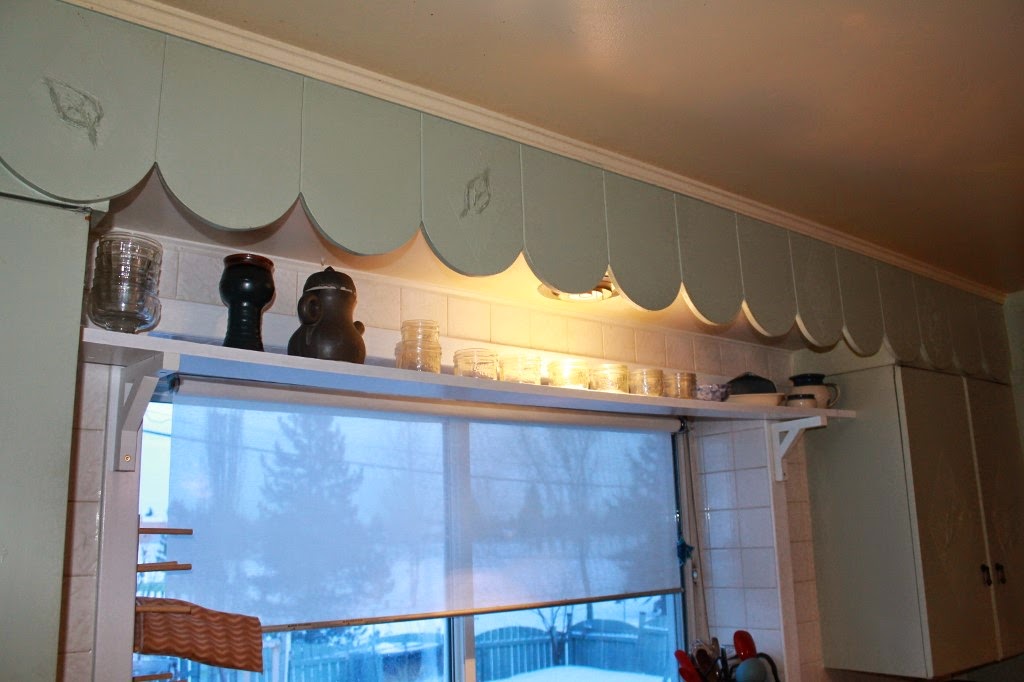 Posted by Evelyn in Canada at 8:11 PM No comments:

A much simpler organization project for today.  Two drawers of mine - my sock drawer and my scarves.

I'm not showing you my sock drawer.  It still isn't pretty, but it isn't overflowing, and every sock has a mate.  That's what I was aiming for.  And my bedroom garbage pail was full.

I should put some masking tape on each pair of socks.  Next year when I will undoubtedly do something like this again, if the masking tape is still there I'll throw them out.  I really usually just wear my black socks.   And the wooly warm ones and handknit ones as slippers.

Other people with lovely closets show how they loop their scarves over hangers or have 5 hooks on the inside of the closet for their scarves.  I have a lot of scarves so that doesn't work for me. 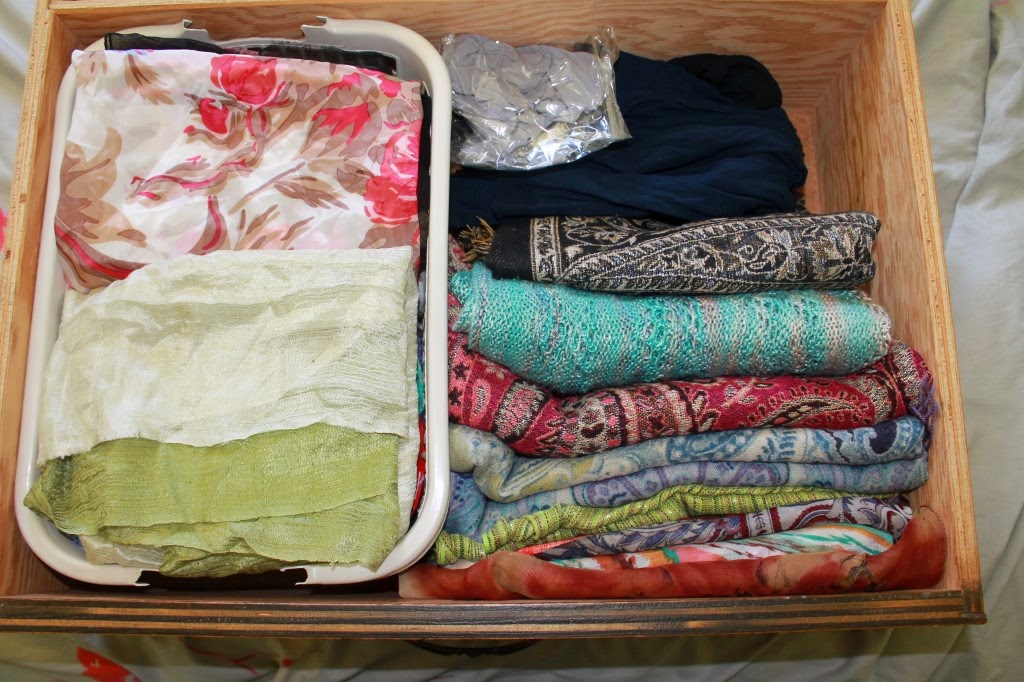 This photo will never appear on Pinterest.  In fact none of my organizing efforts are great examples of anything at all, but it makes me happy that my drawer now opens freely.

It's interesting to see your "stuff" in pictures.  This one makes me want to paint the insides of my drawers something bright.  Maybe I'll do that in the summer when I intend to paint the whole dresser.  Hmmm.  Another project to fill the corners of my mind in the middle of the night...

And today I started on a project that might help me out in the kitchen, but it's a multi-day job so I can't show it off yet.  It's funny how one project just leads to the next.  Does anyone every stop and say "That's it.  My house is done." ?  I can't imagine it.

This is a terrible cabinet that is always in need or organization.  It's full of gluten free flours, and hot beverage things.  And the odd bag of candy that falls on me when I try to get the coffee grinder.

Alice has adopted my Lenten goal with me.  And she drinks a lot of tea, so she wanted to see this area organized and cleaned out.

This is what it looked like after before and after our last re-org 2 years ago.


Maybe I shouldn't have shown you that.  It looks pretty good.  Better than it does today.  I wonder why?  I think I'm cooking and baking less now that I'm working more, so all those containers on the bottom shelf don't make sense now.

I'm going to show you yesterday's work anyway.  No proper before picture though.  It's been so long since I've really blogged that I didn't think to take a picture before I started. 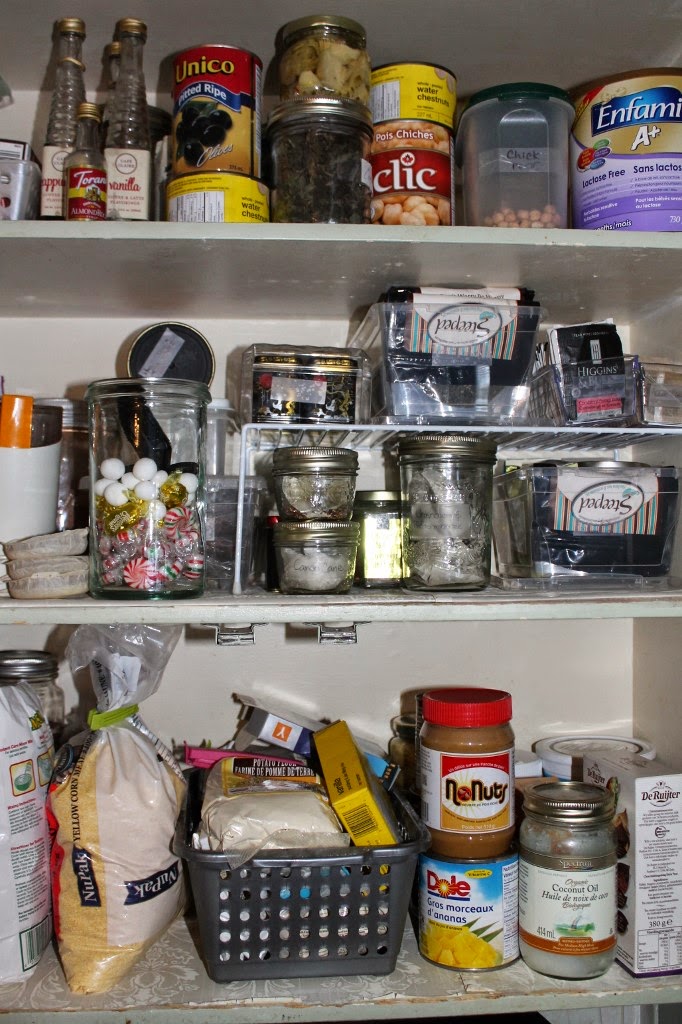 One thing that has changed is that Yvon has developed reactions to beans, no the white beans, huge container of chick peas and bean flours are no longer.  And Alice is now as allergic to lentils as soy and peanuts, so those are gone too.  And we regularly babysit a little boy, hence the big Enfamil formula container.

So, not as nice looking as 2013, but the products in the cupboard have changed and they don't fall on my head anymore.  And I'm not going to buy any more tea until we drink some of them.

Posted by Evelyn in Canada at 7:29 PM No comments:

Again no before picture.  Give me a break.  I'm working full time and trying to get a few things done without trying to take artsy photos of everything as I go.

And I couldn't have taken a good photo of this anyway.

Under the sink.  Blech!  Full of yucky stuff and there was a bag of bags that constantly pushed the cupboard door open.  I hate open cupboard doors. 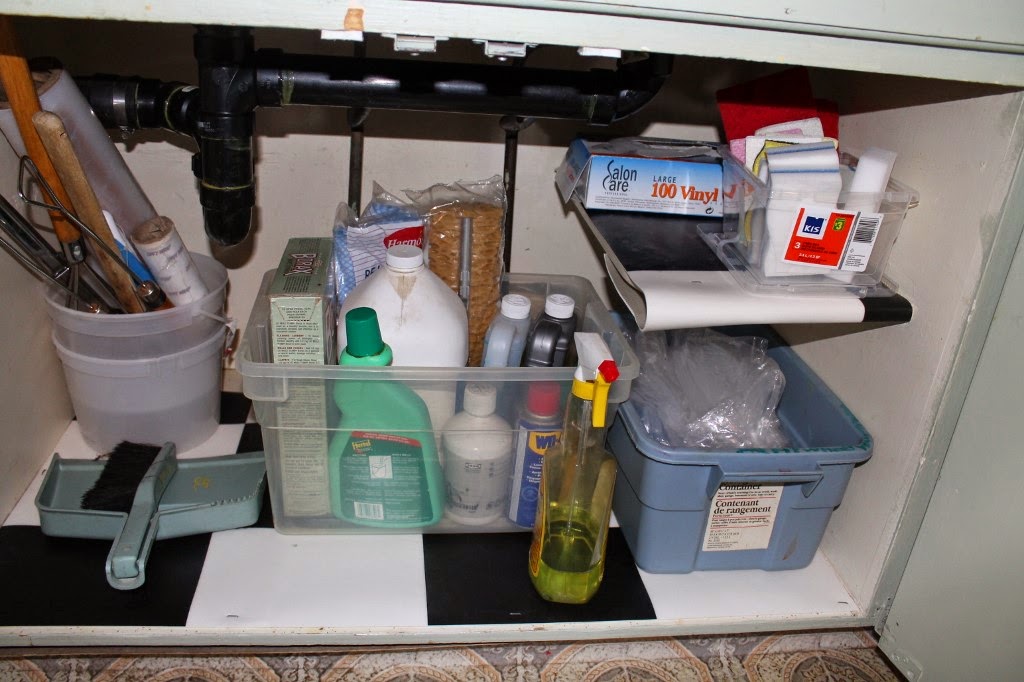 Laura and Alice helped after school.  We threw out old phone books and gross BBQ tools.

And the offending bag of bags is now a container of bags.  It still threatens to leap out of the bin, but that new bottle of dish soap is holding it back. 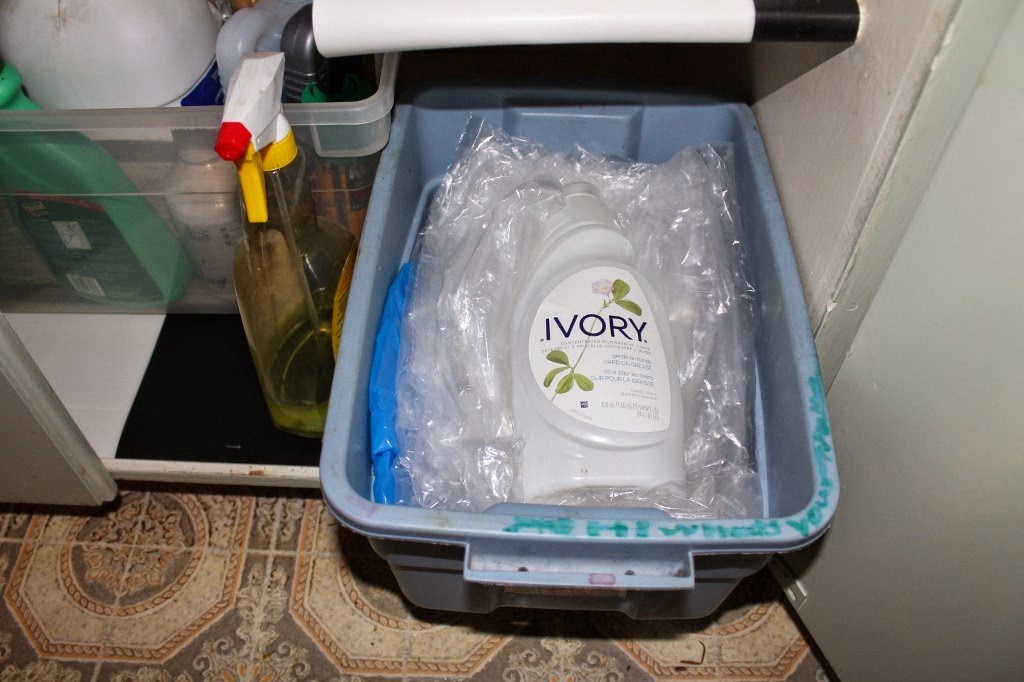 We're not great recyclers, but this is one small thing that we do and it's a win-win for everyone.  A nurse friend of ours saves the linen bags that come into the hospital and used to get thrown away.  They are big, clear bags and great for garbage.  He saves them for others as well, and we haven't had to buy bags for years.

However, he brings them all tied neatly in knots in another bag, and they loosely were thrown under the sink, always pushing open the cupboard doors.  Packaged that way, they expand to fill (and overfill) whatever space they are in.  This means untying the knots and folding them, but I think it will work better.

And this was a Pinterest idea that I hope with work. 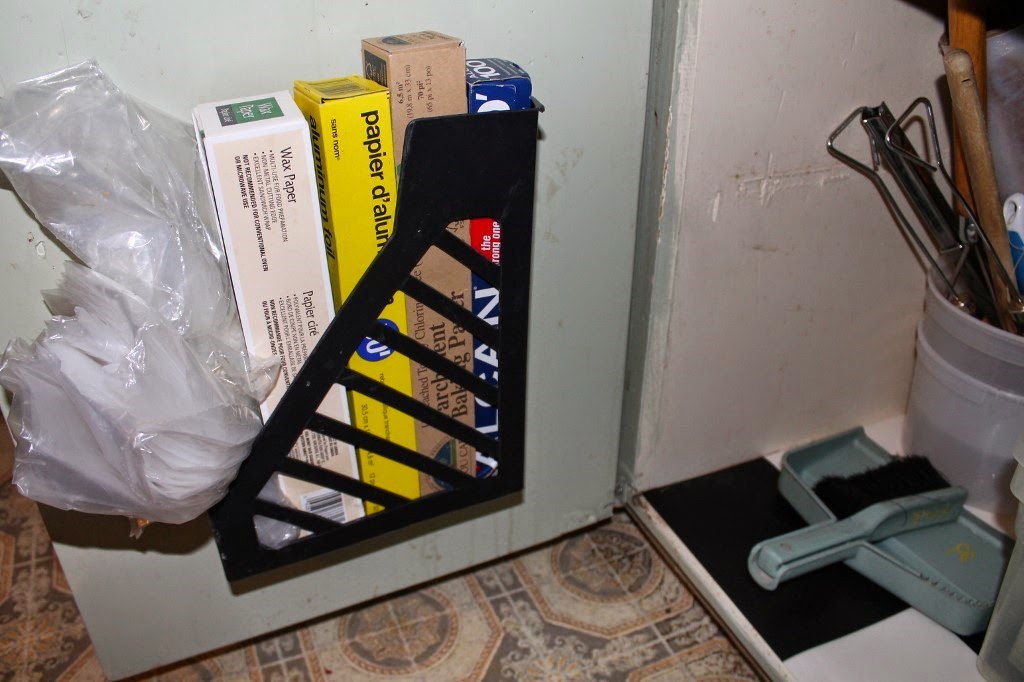 The clear bags aren't really meant to be there, but they are a different size that the others (smaller) and I didn't want them mixed together.  And the wax paper kept falling out of the magazine holder.  This idea is just on trial.    Like I said, I hope it works because it also frees up some drawer space where we used to keep this stuff, and we don't use any of it enough to give it prime kitchen drawer space.

Posted by Evelyn in Canada at 2:30 PM No comments:

Evelyn in Canada
Like all moms, I'm busy, but it's definitely not all about the kids. This blog is sort of an extension of my other creative interests - sewing, music, and gardening. The focus changes with my moods and with the seasons. Blog header artwork by Laura